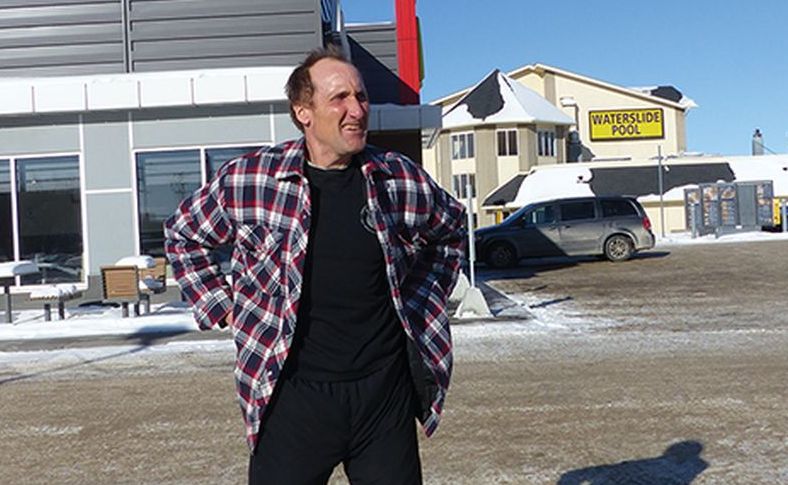 Peter Block of Slave Lake will be competing in his third or fourth Canadian Death Race in Grande Cache this summer. You’ll see him training for it with long runs on the track in the field house in cold weather. Otherwise he’s out on the trails in and around town, with his border collie, putting in the hours.

He’s been training a bit with Alex Pickering, who also is signed up for the Death Race. They expect to see another Slave Laker there this summer as well – Todd Bailey – who has done the race many times.

The Death Race, by the way, is 125 kilometres, over three mountain peaks, involving 17,000 feet of elevation change. Except for the uber-elite in the field, the final part of it is run in darkness. Headlamps are required.

“The first time I did it I went down,” says Block. “Tripped over a root.”

That winged him pretty severely, but he finished the race. And as noted, he’s back for more punishment.

The obvious question here is why anybody would put themselves through this.

“I love the excitement of the race,” says Block. “I love competing.”

He’d be running anyway, though, with or without competition. It’s a love affair that started about 49 years ago, in Newcastle, England…

The occasion was a high school cross-country running race. Block was one of the youngest participants, at just 11 years.

He’s been running ever since – excepting for a period in his teens when he was ill with bronchitis. Encouraged to try out forestry work in Scotland at the age of 16, he worried he might not be up to it physically, but he took to it immediately and worked in the field for 24 years. When he was 18 or 19, his lungs were back in shape and he started running again.

“I did my first half marathon at Dunoon. I came in second or third.”

“I broke three hours. I was over the moon, chuffed to bits. Oh yeah! Here we go!”

Block worked a lot, ran a lot and traveled a lot over the next couple of decades. One memorable run came when he was in Chiang Mai, Thailand, on one of his extended winter (slow season in Scottish forestry) vacations. It was the King’s birthday, and a 12-kilometre run was held as part of the celebrations.

What brought Block to Canada at age 40 was pretty much a whim. He’d heard from friends that picking fruit in the Okanagan was fun. So he flew to Vancouver, took a bus into the interior and asked the bus driver to drop him somewhere fruit was growing. That turned out to be Summerland, B.C.

The fruit-picking went well; even better was an encounter with a young schoolteacher named Cara. They got on so well she invited him to Fox Lake for a visit. After 36 hours on buses, he arrived in High Level, thinking his destination couldn’t possibly be much further. He was wrong.

“She found me in one of the sleaziest pubs in High Level,” he says. “It was another 100 kilometres to the end of the road and then an airplane flight to the isolated community where Cara was teaching.

Things continued to go well and they decided to get married. First Peter had to return to Scotland to sort out his affairs. The newlyweds spent a year in Fox Lake, followed by another year in Manning, before landing for good in Slave Lake. Cara Block has been teaching in the Catholic schools for most of that time and this year is at Roland Michener. Peter started out as a full-time stay-at-home dad, looking after their three children.

That was when he banged up his shoulder running the last leg in the dark, after hanging around “all bloody day waiting.” Two weeks later, his shoulder still very sore, he ran in the Edmonton Marathon, which just about finished him off.

He’s done the Death Race three times since and as noted, is signed up again and training vigorously. He’ll do a couple of hours on the treadmill, followed by those 2 ½ to three-hour runs on the indoor track. Outdoors is what he prefers and he’ll do 50k runs in town when conditions permit. On special days he’ll do more, and one of those is coming up.

“My dog got tired out after about 10 kilometres. I took her home and finished it off and then had a couple of pints at Mike’s.”

Block had a memorable wildlife encounter last summer while out running with his dog. It was on the trail in town along the creek when a bear rushed out and attacked the dog.

“She was getting ripped apart,” he says. “So I charged the bear.”

The bear responded by charging him, then turned and went after the dog again. Block says he got between the bear and the dog and the two of them ran off down the trail. The bear followed for a bit, then returned to her cub, which was up a tree nearby.

Besides the big races, Block competes in two or three half marathons a year. He often goes with Gail Ungstad of Slave Lake, another dedicated runner.

“We go do half marathons all over the place,” he says.

One – the aptly named Hypothermic Half Marathon – was in early February in frigid conditions in Edmonton. The Edmonton Journal had a photo of Block, with frost encrusting his eyelids and other parts of his face. It looked pretty brutal, but he says he loved it. 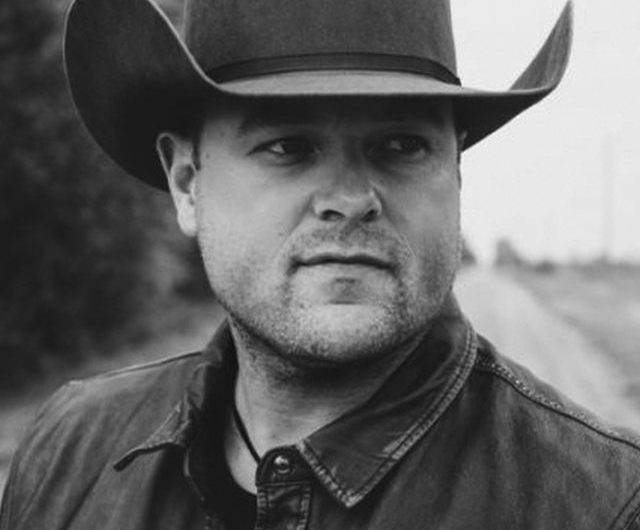 Canadian country music star Gord Bamford will be lighting it up at Sunset Place in Slave Lake on Aug. 22. That’s the answer to the teaser town councillor Shawn Gramlich dropped at a council meeting a few weeks ago. ‘Something big’ was about all he would say at the time.
On July 28 Gramlich let the cat out of the bag, so to speak. He – or to be more accurate, the Slave Lake Regional Tourism Society – announced Bamford would play a ‘drive-in concert,’ for 170 vehicles at a time. 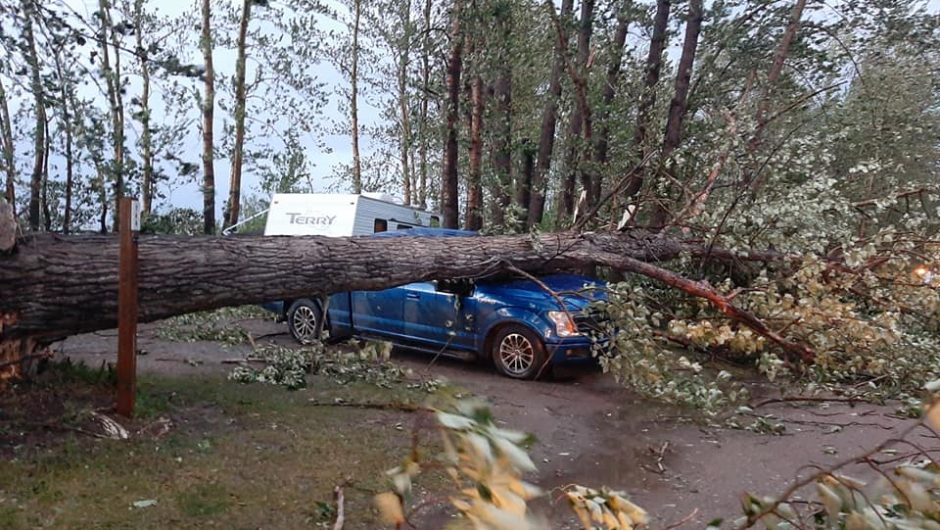 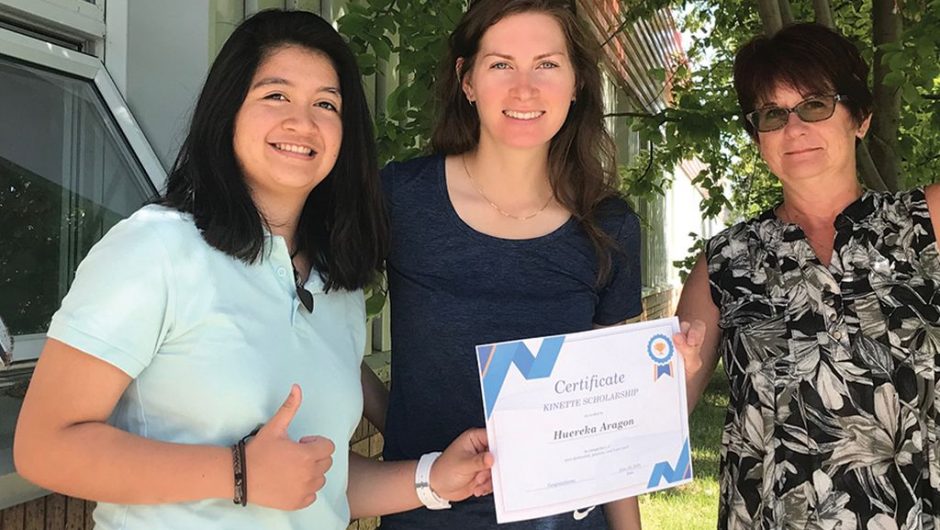 Around 60 students graduated from Roland Michener Senior Secondary School this year. That included those from the Lakeside Outreach, which comes under the RMSS administration.
As usual, a long list of scholarships accompanied the Roland Michener School graduation ceremonies. 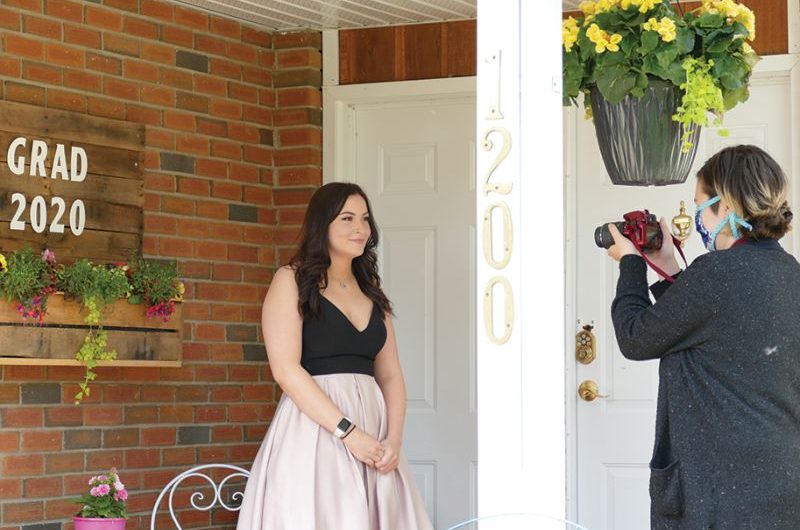 One of the biggest factors in graduation style this year in Slave Lake area is grad class size.
With only five grads, Slave Lake Koinonia Christian School will be holding a family only outdoor grad with under 50 people. 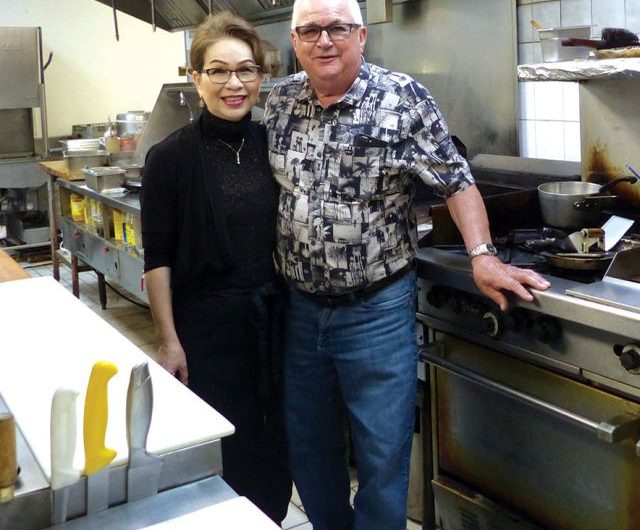 Judging by what restaurant managers told us last week, re-opening their shops to sit-down dining has been well-received. Even at 50 per cent capacity, it is a welcome return to something like normalcy.